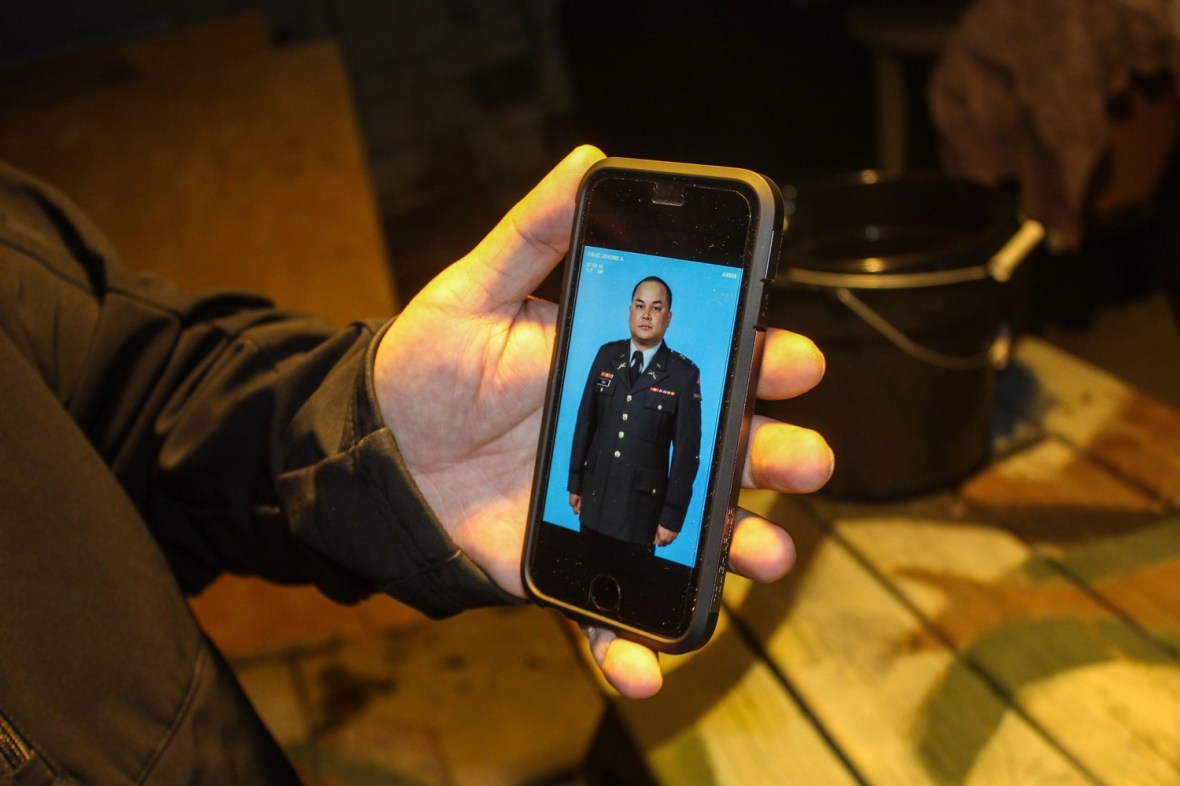 “Believe it or not, all the struggle were my most beautiful moments, it’s not all bad. In a lot of ways it’s like; I would describe freedom, and being able to flex pure freedom. This will be one of them, being out here, you just gotta find your mission, and stick with it. I mean, find your way. There’s million ways to work out here. You just gotta find something.

Something about like the bad times, it makes you really discover, you’re really honing on your skill, on what you do. The bad times actually really bring the best out of you. Even visually, sometimes you’re really f*king down and out. To be honest with you, aside with the music stuff, when I get into the painting, it’s different kind of Zen for me. It’s almost like sometimes I don’t care, I wouldn’t even eat sometimes, I don’t even realize it to my body.

I’ve always done music. I’ve always been a visual artist as well, I paint and everything too. So first story back in Guam, I went to school to get my degree, find my major in Fine Arts, and leave everything I got. While I was there, I went to the military. I graduated with a commission as an army officer. I went to the army for four years, and then I travelled around. I went over to Kentucky. You know I was a Tanker? It was pretty cool.

While I was in the military, I was still doing music and arts. I did my first four years, and I just decided, I don’t want to be in the army anymore. When I finally accomplished everything; I got my degree, I got my bachelor, I’ve become an officer in the army, I became a lieutenant. After I got out, now I’m gonna do me. That’s the way I said, ‘Look, I did everything I said I was going to do; I’ve worked for you, for the society, for your family, so you don’t look bad.’ In my family, my brothers and my sisters, they all got degrees. They all finish school, and everything. It’s a promise I made to my dad before he passed away, that I have to finish school.

I’ve been able to do music. I just come up with concepts, but when you’re trying to write a song, if you don’t have any kind of struggle, how are you gonna write? What are we going to talk about? Being happy? It’s always like that, with any genre you’re in. There is always that struggle or just that stories, that topics, that content of the story is what gonna get you. It’s a constant challenge. You’re good at one point for a little while, but suddenly boom! You got to pick yourself up again, and must start all over. You know Talib Kweli? He calls it the beautiful struggle. He has a song or actually a whole album called ‘The Beautiful Struggle’.

But struggle by itself, the word struggle is a f*ked up word, no one likes to struggle, but you ask me couple of questions, and that’s what I think. I think you got to pull the good out of the struggle, and force you, it helps you to create in a weird way. I know that I was being happy, and I was financially sound, all my bills are taken care of. That’s cool, but guess what happen? You got sucked into that world. Now, you’re thinking work, you’re just go to work. You come home, and you’re tired. You’re not making time for your craft, your passion. You’re just tired. You go home, and you sleep because next day you gotta work. You gotta do good at work, and pay your bills, and stuff like that. Next thing you know, you’re in the cycle again, and doing that leads you back to the comfort zones. If you’re getting into your comfort zone again, it’s almost like you put off your creativity, because you’re comfortable now. You’ve been struggling for a little while, and now you’re like I wanna enjoy this. Let me enjoy this while I have some moneys in my pocket, and my bills are being paid for. So, you put that shit off, and once a while you do create.

I have my ups and down too, from different chapters in life. Like military is one chapter in my life, book closed, and now, I’m not gonna do it anymore. But, there was definitely up and down. If I still in (the military) right now, I would only have like eight more years till I retire. I would be a Major in the army right now. I would still be an officer, which is not bad. If I was back in Guam, who knows? It would have been different stories. If you love something enough, you’re gonna make the time for it. It’s like a person; if you love them enough, you make time for them. It doesn’t matter how busy you are, you will make time. You will stop other things to do, whatever you are doing, it pushes you what you want. That’s kinda what I noticed, as an artist, it’s kinda crazy. We’re pulled from, I wouldn’t even say negativity, I would just say, we’re pulled from everything that kinda has a negative annotation, like depression, you’re kinda pulled from that.

For most part, I used the military kinda as a stepping-stone. I used it as a tool, a good tool to get out. Aside from that, I came from the military family. My father, my grand father, and his dad too, in the military, and stuff like that. I tried it out. It’s not exactly what I want it. It wasn’t for me. Being a creative person, it’s just a tool for me to get out. I appreciate it, because it got me to places where I would never thought I was going. I got out. That was my ticket out from Guam. I didn’t realize I wouldn’t come back for years after I got out. So, that’s basically it.

I decided to come out to Los Angeles, and I stayed in Hollywood. Before I moved here, I was in Hollywood for three and half years. I went to Los Angeles Recording School, and then to Los Angeles Film School. I started to learn how to do mixing and record properly, professionally. While I was there, I still had enough money to go through the film school. That’s when I got in to the film side, doing sound and audio editing, and everything like that, film composition, score music, and stuff like that. I made our first group CD in 2007. So, I’ve been doing music ever since.

I just don’t feel that as a creative person you could really contribute in a field like the army. With the army I felt like, don’t get me wrong, we need it in case somebody comes in, we need to defense our country, and protect our people, and stuff like that, for that I’m grateful that I know how. But, when it comes to being a creative person, when you are in the army, maybe you think it as a stepping stone, as a process before you get where you wanna go, and that’s cool.

Anyone can speculate, you could go anywhere, and make your mark anywhere you’re at. I’ve come to LA, which is the most saturated market in the world for music and entertainment. This is the industry capitol hub. Why do I feel like I could go here? Because everybody out here is on the same mind state. It’s like I could relate to more people out here. The dreamers come here. Everywhere I’ve been before, I’ve always been the dreamer outside of the f*kin normal-circle. Everybody else is always f*ckin, yeah, I’m gonna do this, this is my shit. Get f*ckin married, have kids, get your pensions, do your 20 years, and that’s it, that’s life. Get grandchildren, that’s your life, whatever, and I’m happy for them, don’t get me wrong. My have friends that have houses, have children and kids, and mortgages, and that stuffs. I’m happy for them. I want that for myself eventually too. But there is something about, you know what it is man. Being an artist is something that drives you. It’s different. You’re wired different. Your existence is different.

My friends, their lineage will be passed on to their children. That’s their job. They want something to pass on, they’re going to have actual descendant. Now, it’s a crazy world. We’re in a digital age. What you put on the Internet, it’s there forever. Somebody like, long after I’m gone, and the people who know me are gone, no one is gonna be there to talk about me after I’m gone. Even the people who know me, after they’re gone, no one is gonna really know who the hell we are. The only one thing that is going to stand the time is our work, and our body of work.

Right now, I’m trying to build the body of work. That’s what I see it. If you don’t have anything to show for, as an artist, you’re wasting time, let the shit just pass by, overtime, that’s on you. You might have that’s one song or something that everyone remembers you for. But I’d like… who knows… The more you have out there, you could touch more people. More people could have favorite of one of your song, favorite paintings of yours or favorite storylines or movies. Now you have more things to build and put out there. Who knows? Where were we from?

When I first thought about going to the military, the whole time I knew, I wasn’t gonna do that. But I thought about it, and I tried it out. 20 years until you retired. That’s it, and that’s all it takes. I knew, deep down I knew, I wasn’t gonna stay 20 years. But I used it as; I tried the military out, let me show my family that I could be disciplined, that I could follow structures, and complete shit. It looks good. In society, when you do stuff like that, you’re wearing an uniform, and everything, it’s prestigious. It looks good. So, I did that.

I tried, I did it, and I promised him (my dad) that I did it. I succeeded and completed it, but now that I’ve completed it, I’m doing what I wanna do now, and no one can take that away from me. In another words, that’s part of the struggle that I was telling you about. It’s the beautiful thing for me. You know, everyone is getting older, a year passed, next thing you know, f*ckin ten years passed, you don’t even realize it. Like ten years gone by, and some different things in it. I missed out in certain things, but there are a lot of things that I actually gain. Just keep on doing things, the perseverance, keep pushing, that’s the hardest thing.”

Some of my friends, they were arrested six years ago, they are still in a prison

“I left Iran five years ago, and I went to Turkey because it was not safe staying in Iran anymore, and I didn’t have a plan, any kind of plan....

Some people have what they called ‘survivor’s guilt’.

She would say, “You cannot do that. You have to become rich.”

“What is my biggest struggle? My parents. Well, my mother, because she shouts at me a lot even when I’m wearing or dressing or eating food for three till five...