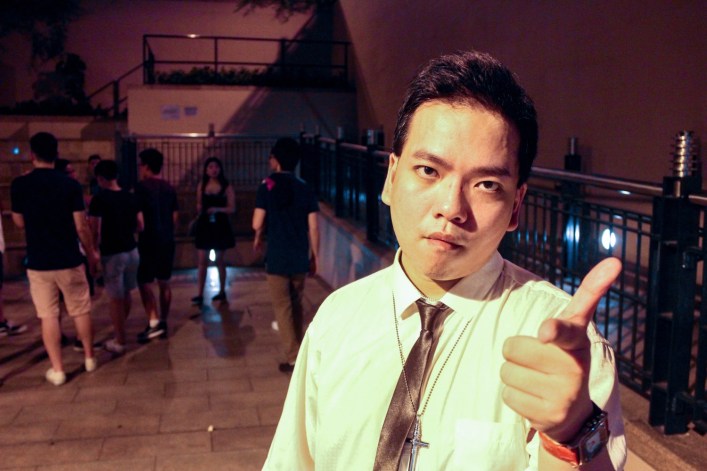 “What is my biggest struggle? My parents. Well, my mother, because she shouts at me a lot even when I’m wearing or dressing or eating food for three till five hours. I just don’t want to stay at home. I wanna go out and meet some friends. That’s why I’m coming here.

I don’t want to stay at home, because it’s an unfriendly environment. Every time they’re watching the local Cantonese television, and I’m watching another foreign language television channel, which is a gap between them, but I don’t want shout with them. So, I’m just moving out. I want to escape as far as possible, that means I moved to UK, to Switzerland to study. That means I don’t want to live at home.

I’m from Hong Kong but I studied in UK for ten years, and in Switzerland for two years, and then I came back. Although I have to say Hong Kong seems to be much more like international city.

What do I love in life? Property, Currency, Luxury Car, Fashion and in the end I’m doing like what my mother wants me to do. Sometimes when I’m younger, but it’s a different story. When I’m younger, I was studying in UK for ten years, and it cost a lot about four-five hundred thousands Hong Kong dollars (HK$400000) which is around to forty thousands euros, which is a lot of money. So, I have to work hard to earn the money, and pay it back to my parents. But my parents or my mom said, ‘You don’t have to pay the money. Just take care about yourself, get a girlfriend and get a baby.’ She wants a son of the son. Traditional Hong Kong’s family is thinking like that.

Sometimes I’m thinking, the UK and Switzerland style is you’re free, you go to work, I don’t care what you want, you can live outside, at least you take care about yourself. There’s a reason I want to pay back the money to my parents, because they didn’t ask me when they wanted to give me better finance, so that they supported me to UK for study. You have to think about it yourself. I have to pay it back. The money for my study in UK and Switzerland. After I pay them, I will disconnect every contact with my mother, and just move away. So I can be free.”

The hurricane Katrina destroyed everything I owned