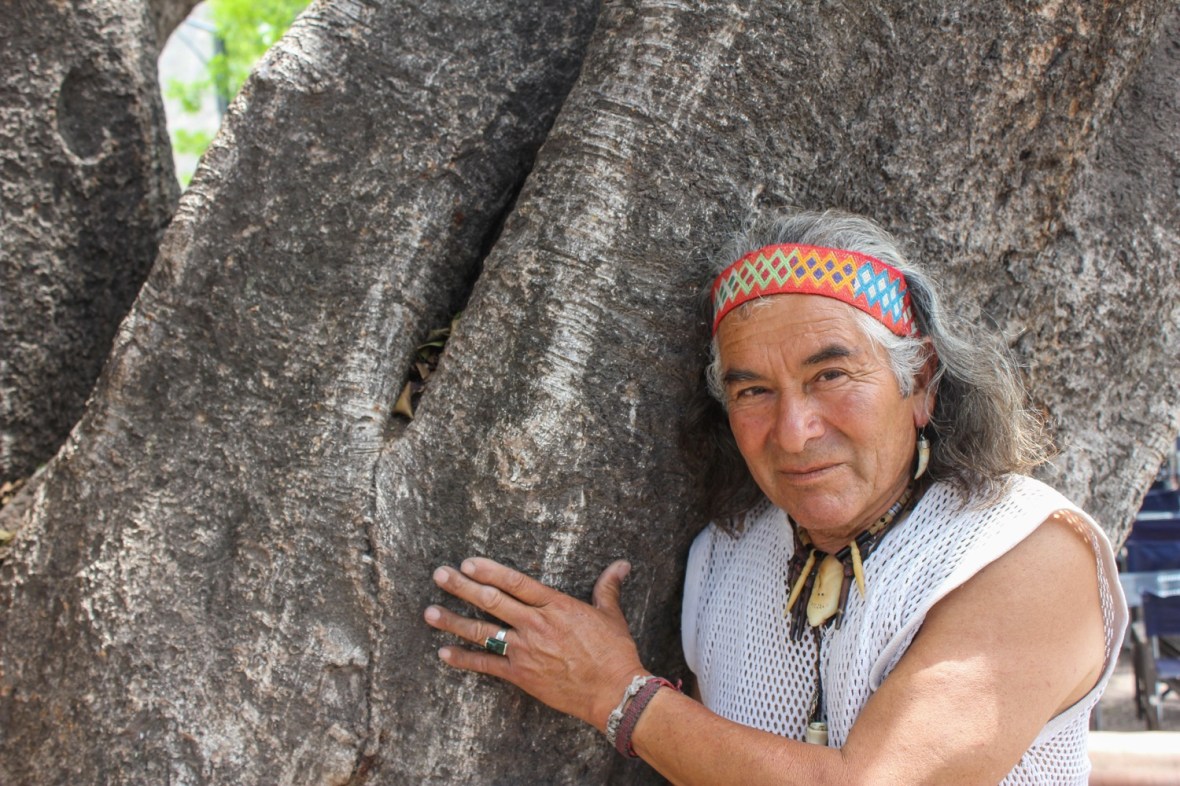 “Hi. My name is Ashko Yana. My name means ‘Black Dog’ in Quechua. I’m from the community of the primitive Incas. I was born and raised in a jungle, where I did not know who my father or my mother was. In the time of seeding soy, they cut the tree where I had a house that was a trunk, like the trunk of the giant tree that is behind me. They cut the tree, and I wanted to find out where they took my house. I got on a truck or a tractor where they put the wood. I appeared on a site after many days of travel in that truck or a tractor, did not know where it was, because at that time I did not know where it was, and I could not describe it.

When I could get out, I was weak. I had not eaten for many days, and I had not drunk water. I was captured. I was slaved. They enslaved me to work with leather. I did handbags, shoes, belts, wallets, and all leather products. This made me hating leather. I can’t wear leather on my body. I learned to do many things with leather, but I do not work with leather, and neither use it. I live most of my life barefoot, no shoes, no sneakers. I do not use belts.

I have not learned to read. I have not learned to write. The cause was a little of ignorance about the human being that was different from an animal. The animal is more comprehensive than the human being. If an animal sees a child fallen, the animal picks it up. And if the child is hungry, the animal raises him as if he were its own son. Instead the human does not pay attention, especially in cities, which are the concrete jungles. They are not like the jungle where I grew up. Nature is wiser than the concrete jungle. Sorry, I cannot explain more, these things hurt me. There are things that cannot be explained. There are things that cannot be explained, because they hurt a lot. And I try to endure my life in another way. I cannot tell many things about my life, because it hurts a lot.”

One day before coming, many bombs dropped

“We went to Israel in 2000, and returned to Argentina in 2006. My husband has a family in Israel. Living in Israel is nice. Everything is nice there, the only...

I work as a waste picker

“I work as a waste picker (cartonero). Every day I get up and go to work. I work hard. I live quietly, and do not bother anyone. I don’t want...

I have 5 children alive, and 2 kids who died

“I moved here 22 years ago. All my children were raised here. I have lived here since my oldest child was 8 months, and now she is 22 years old....

I was a waste picker for a long time

“You have to understand something about my story; I'm living in a slum not because I want to but because sometime life, whatever you do, beats you hard. Now, I...