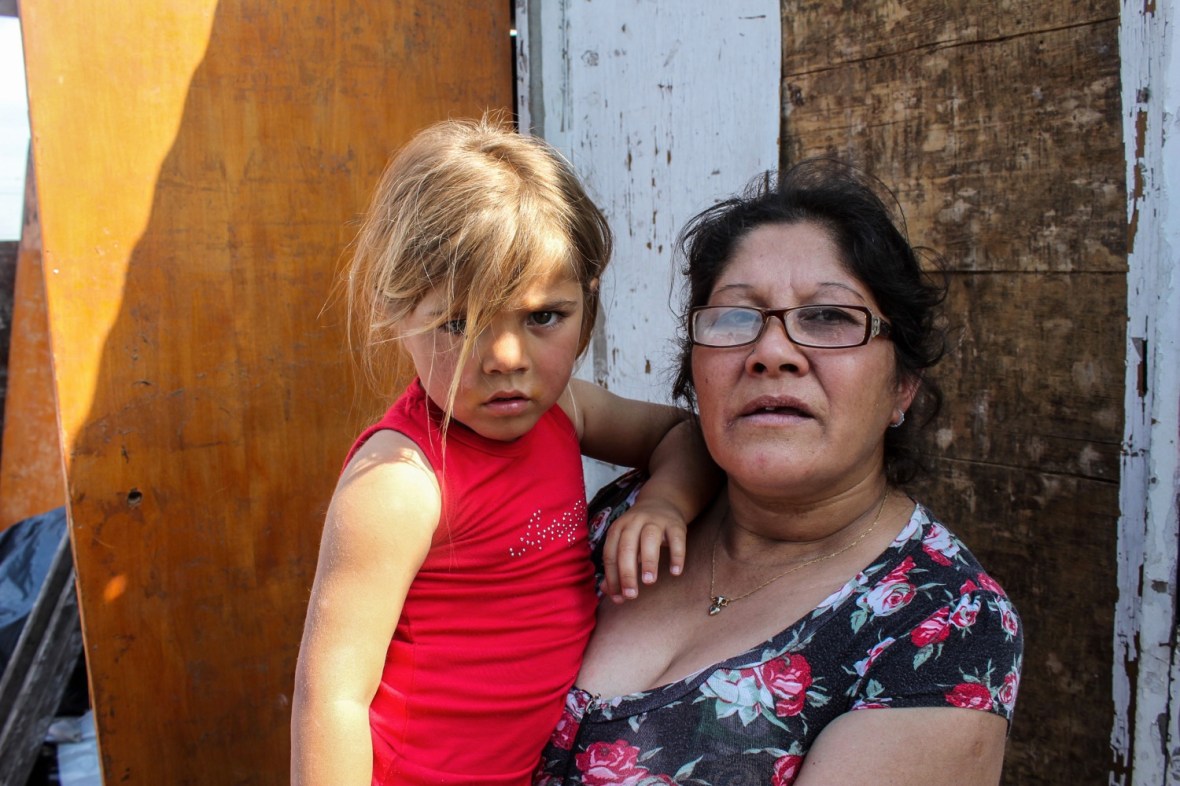 “I’ve lived in Las Chacritas since a year ago. Four years before that, we lived in Lanus, and our house burned. I had sold the land that belonged to my dad, and we were looking for a house in Monte Grande. When we found a house, we were arranging with the owner of the house. They called to tell me that my house was burning in Lanús. My neighbors helped my mom, and my three little children. They saved my family from the fire. When I got home there was nothing left. My mom’s house and my house had burned.

We spent two years in another house, then we moved to an apartment. We wanted to make a deal, and it went wrong. We could not rent an apartment anymore. We had bought a car but we sold it to buy this house.

Neither of us can work because we are sick. We are heavy smokers. We receive a social plan. We put a small kiosk with that money. And with the profit, we survive. We also received help from the food shelter area. On the weekend, our kids eat there. We try to survive as much as we can. Before, I was selling things on the street: socks, underwear, anything I could.

I ran away from my home when I was 15. I went to live with my boyfriend. I need to leave my house, because of a situation that had occurred. First of all, I had a very bad relationship with my mom. We always had fights. My mom used to rent little rooms by the side of our house. When I was 10 years old, I was abused by a man who rented one of the rooms. I spent 17 years keeping that secret. When I was 27, I argued with my mom, and I told her the truth. She did not care.

Today, she does not believe me. And that is typical when something like this happens, nobody believes you. And I never did anything. Now that I am 46, this has passed. I saw the rapist every day for 5 years. Then, I decided to leave. My father died 26 years ago, and never knew this. These things are not said out of shame and fear. The same person threatened me. He told me that he was going to tell my dad, and he would be angry, and would send me to an orphanage, and I would not see my family anymore. So, I did not say a word.

I have been stumbling, tripping, and stumbling in my life; I had a son when I was 15, now he is 29, and then I had another daughter, who is 27. The marriage did not work. I tried again with another man. I had Cristian who is turning 24, Rosana 22, Fabian who is 19, and David who is 17. After that, I tried again with another partner. I had Camila who is 13, Ana is 11. With my current husband, I had Franco who is 5, and Bianca who will be 4 soon. I have 10 children, and 13 grandchildren. We are one big family. I’m an only child from my father side. The daughters of my mother never accepted me. When I was a kid, they should’ve taken care of me, but they did not.

I did not have a good life, but I’m with my family. The things that happen, one must surpass them or at least try to do it.

All the bad things that I experienced in my life, I do not want to my children to suffer the same. All I have, a little or much, is for them. Because when you die, you cannot take anything with you. The only important thing are my children, my family.”

“I used to live in Jaguel. My mother died, and then I met my partner, Pablo. Before I had another partner, I moved here with him and my 4 children....

When I started working on my own

“I’ve lived in the Barrio Las Chacritas since two or three years ago. I moved, because I did not like the other neighborhood, so I came here. I used to...

I had to look at my children, and I had nothing to feed them

when you have the life I have, when you fall so hard