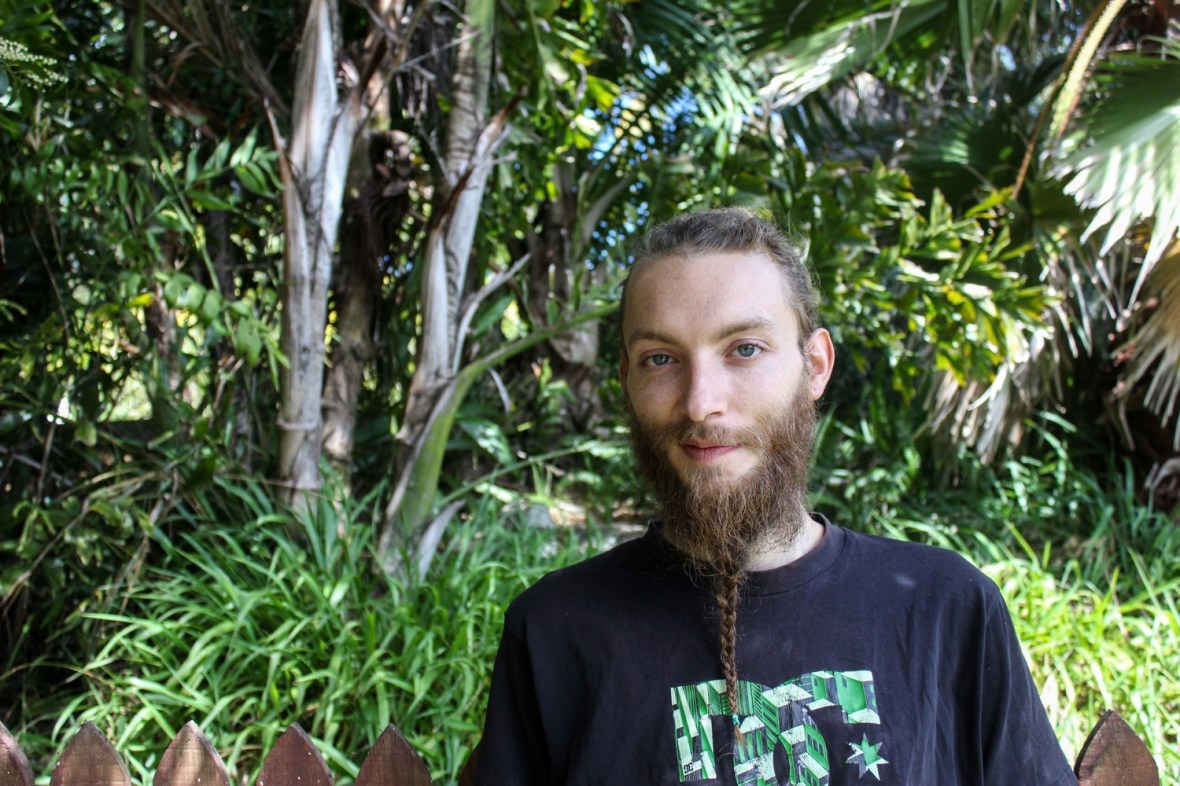 “I burned everything I had in Germany. I burned everything like all the furniture, and all the stuff that I owned on a big pile, and then I just grab my backpack with my kilograms, and went to Australia. I just brought myself up here in Nimbin, and I just stayed. I was invited to a community where I was living for nearly one and half years. It’s a self-sustainable community. So, we’re just using rainwater, and we’re growing our own veggies, and we have couple of chickens to get some eggs, and stuff like that. We’re trying to be self-sufficient completely. And my story is like; I want to step out of the society really. Don’t want to be part of that, like normal. Because for me, it makes no sense, for me, I have to come back to nature. I have to find myself. I have to sort out my problems, and I have to go my own little pathway. For me, the normal society is just about rushing, and being something, and owning something. And like, the more money you have, the more you’re accepted in society. So, I am just trying to get out of all that.

I’d like trying to be on myself, to support myself. That’s what I need, and I just don’t give a f* about what people think of me or don’t wanna be in a work structure as well. I don’t like to work for the company just to raise their profit. Because I would like to work in a company where everybody is owning the same kind of money, the same amount of money so there is no f*king hierarchy; boss, vice boss, and then its like going down, and down, and down. For me, it should be, everyone, and everybody should earn an equal amount of money when we work for the company together.

Don’t know, its just about that the whole f*king world has been surrounded the capital. I’m not a big fan of that. Especially, because we are producing all the problems of the world, like all the countries that are really well with money like Germany for example in Europe, or France is not too bad as well. But on the other side, you have all that countries where people are really like suffering, and you got so many refugees now, like all over the world. And its just like the people are not thinking, okay, let’s do something together to figure out the problem. The people are just like, separating again. They’d like; there’s we and there’s the others. So, I really don’t like that. Because for me, the label ‘refugee’, just the label ‘refugee’ for human being. It’s just wrong because it’s a human like you and me. Its like not a like, I am a refugee, you can say that as well. Like, I was escaping from Germany you know. But only by putting that label on persons, you make them different. That’s why people are scared of it, because it is a different thing. And it is like not part of me, it’s part of something else. That’s the problem. I think people have to get over that.

I was struggling the most really when I was living in Germany, and I just didn’t feel accepted. In my way of thinking, I just felt pushed out, and I mean, there are lots of hard moments actually in my life. My mom got cancer for example, and I had lot of troubles with the police. They broke my nose, they broke my chin, and they broke my ribs just because I stand up for my right, and were just saying my opinion on protests, and stuff like that.

We had a little house where all the alternative people were living. It was unoccupied house. It’s like an empty house that we just used for cultural centre, to give the people the chance and the opportunity to come to our place, to be out of that moral structure. And then one night, police just came in, and they smashed the whole building. They just beat everybody up who was in that building. We couldn’t do anything. We were like sitting on the ground, with our hands up but the police just didn’t give f*. They just came in, and pepper sprayed, and directly beat up everybody with their f* truncheons. And I don’t know. It’s just like, you know when you’re trying to be, you tried to do your own thing, and you’re not harming anybody. So you’re not like you’re doing anything, which is disturbing anybody else. But there’re still people trying to push you down.

So yeah, for me, the hardest thing is anyway, to accept how the world is running, really. That is my biggest issue, like why the world as it is. Why the people is f* greedy? And why they’re not supportive? Why they’re not like living in solidarity? Why they are not using the potential that we have to create something beautiful? Create something for everybody happy. But people are always on their own ego thing. So, that’s my think. That’s my thinking. That’s my issues. That’s my kind of stories. I’m kinda of hiding here, really. I mean Nimbin is beautiful, and I really like it. But in the end, I’m really like hiding. Because there’s nothing else what I am doing here. Just like being here is time stops, and you don’t have to think too much about any problems, and you can just like live from day to day. But in the end, that is not the solutions as well. You know, it’s not. Because I wanna make some changes as well. It is not happening by just sitting here, and smoking some joints. It is pretty much some kind of retreat as well, to calm yourself down, and to get some new energy. To use that energy; to use that energy to get out of that with more power afterwards. So, it’s just like… That’s what I’m saying it’s not a place forever. It’s a place where you can have like your retreat, your leave, and everything. You’re taking a leave with your time. When you have the power again, you have to use that power to do something else.

When my mother got cancer, I was pretty much with myself all the time trying to suck it all up, and didn’t let it out. I am trying to figure it out with myself. I was not talking to anybody. I was not like the guy who is always around my mom. And then I wasn’t talking to people, talking to her, and trying to help her. I was just like mainly on myself, just to figure out what I can do, but I couldn’t find a way to help because it was really hard for me. But in the end, I just like I figured out that it was not my fault, that I was not there. Because there was an issue for me that I had overthinking. I was not there enough for my mom at that time. Eventually, I thought, nah, that’s just a way for me how to deal with it. I couldn’t be there all the time, because that would have destroyed me.

I was just trying my best, trying to figure out with myself, how I can handle the situation. In the end, it worked well. She fought the cancer. It was quite nice. But it was just heavy experience. It was just like having Christmas, and then my mom having no hair, and baldhead, looked really sick. In the end, it made me stronger anyway. I’m just following my way actually.

From that experience, I learned that it is not about guilty. There is nothing you have to feel guilty about. Because it doesn’t matter how you react or how you’d like to do or what you are doing in that whole situation like that. It’s just like; your own personality, which is creating that behavior. So, it is not bad to have that kind of behavior. Even if you feel guilty about something, it doesn’t matter, because it’s just you. So it makes you as a person. That’s what I found out really. For me, Nimbin is just a place. I can just shut off all that bloody thinking. I’m thinking so much all the time. And see, I just can like shutting it off. I can put a switch, and I am not thinking anything. I can’t do that anywhere else in the world. I could never sleep in Europe. I was not able to sleep. Here, I’m sleeping like a baby.

There is so much about that energy. For me, it’s all about energy. The place, which has energy where I can suck up that energy, and use it for my self, for my inner body, then it’s definitely the right place for me. So that’s when I felt Nimbin is right. Because I just felt the energy of the area. There is a lot of healing energy here: the sea, and the wind.”

“What is the most beautiful moment of my life? It's a though question for me, but I'll answer you. To start, I was born and raised at Studio City, and...

The life of an actor is hard

“I was born in Santa Fe. I studied theater there. I came to Buenos Aires 10 years ago. I have a son who is 23 years old, and another...