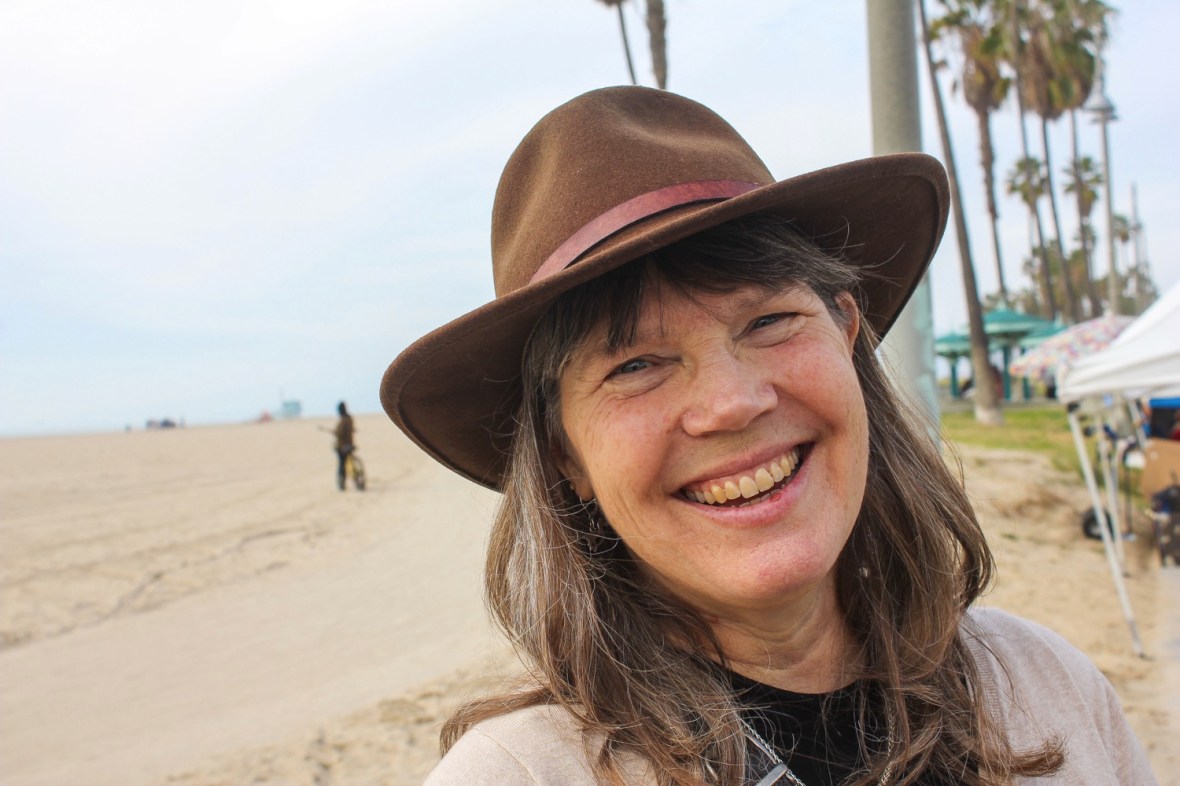 “What is the most beautiful moment of my life? It’s a though question for me, but I’ll answer you. To start, I was born and raised at Studio City, and I went to UCLA. I was studying Danish, and I met a Danish man at a party. My mother is Icelandic, and I wanted to go to Iceland. So right away, we had a Danish, English, and Icelandic in common. I don’t know, I met him maybe in 1978, and in ‘81 we got married. After two years, we moved back to Denmark, to his family farm, and I was working in a grocery store with a master degree in Danish. I don’t know. It was like; we have so much in common. So, I have been living in the same house now in Denmark, in the farm where he was born, for 32 years. I now teach Danish and English in a high school in Denmark. So, the beautiful moment in my life is the birth of my son. I was very tired actually but it was… I think indescribable. I don’t think you can describe what it’s like, all of the sudden to have this human being that is really product of love and some food you ate. I don’t know. What else should I say? I don’t have a lot of beautiful moment.

I had a lot of sad stuffs that happened though. My beautiful son died at the age of 25 in a bicycle accident, four years before that to the day minus one, my younger brother died. I am in LA a lot because I had two aging parents here, and my dad just died on 26 December. It was a lot of loss. My sister in law died, her husband died, my brother, on 24th. It’s just been a lot of loss in my life. I lost my good friends way too young, and I don’t know why I keep on going. I still love them, and it still hurts. But I think life is beautiful. I think there is good in all experiences.

Anything that happened to you, you can learn something from. I have an experience of having lost a child. I think it’s the worst thing you could have than anything. There is something worse that can happen. People could loose a child, and loose ways I think. But I feel like I’ve got some experiences now, having been through that nobody else or that a lot of people don’t have. Thank God for that. I’d rather have my child, and the experience, but it also let me know that I shouldn’t take things. I shouldn’t worry too much. Shouldn’t take things too seriously. Don’t take yourself seriously.

If you don’t know it from the start, it is good one to have learned. So I think, I went from being a control freak to somebody who is OK, whatever… Problems happened, you solve them and you move on.”

The life of an actor is hard

“I was born in Santa Fe. I studied theater there. I came to Buenos Aires 10 years ago. I have a son who is 23 years old, and another...

We are indigenous people, please listen

“Good afternoon. I am Felix Diaz, and I am a member of the Qom community, an indigenous community from the northern part of the country. We live 170 kilometers away...