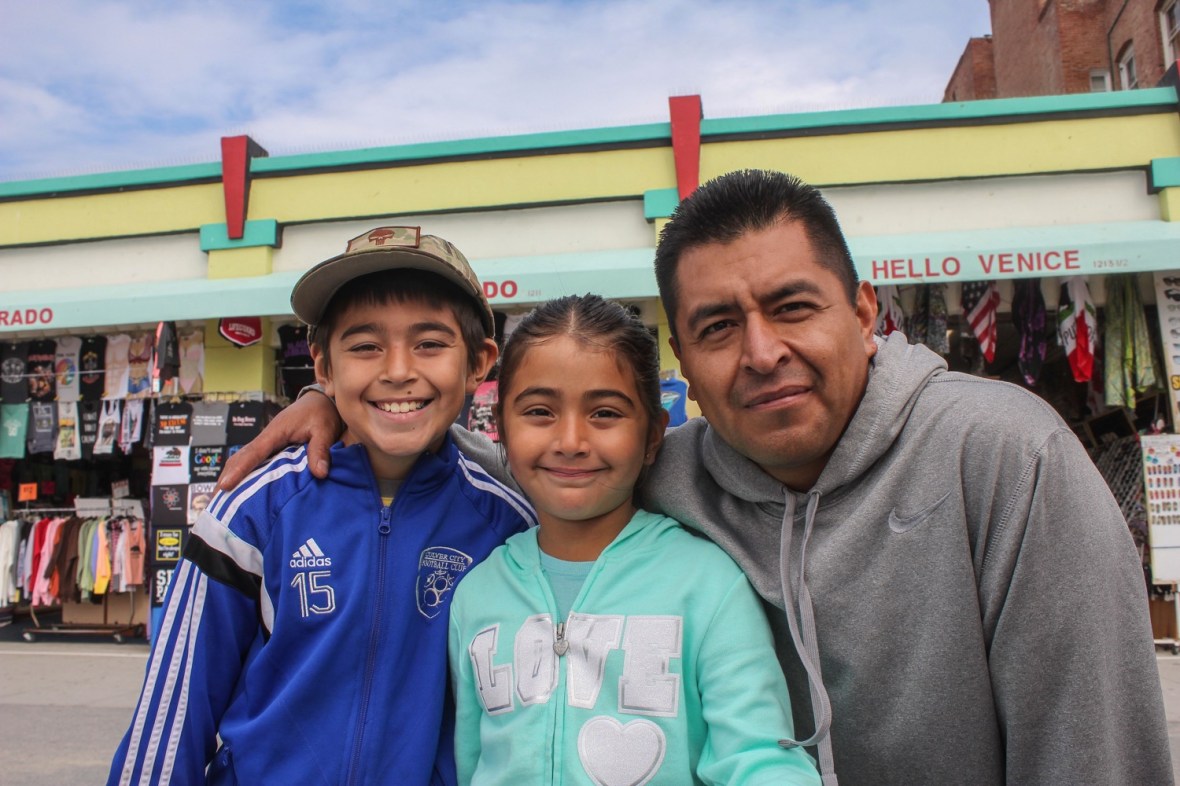 “Trying to cross the USA border on my own was probably the most challenging situation of my life. I starved, get deported, get kidnapped by a cartel, but I did it for them, my children. Now, I’m back. When my son went to pick me up on the street, he was scared, because I was really skinny. I was really dirty on my face. He didn’t recognize me. It was hard.

I’ve lived here for 18 years, and then after those years, I got deported to Mexico. I first came here when I was 11 years old, never came back until I was 30. I got sent back. Since I did not know anybody in Mexico, I went through a lot of stuffs. I struggled for four years to come back here. I went in 2011, and I came back last year. It was hard, man. It was hard. I came back for my kids, Manuel and Olivia. He is 9 and she is 5.

During those nine days on the freeway, I was just walking straight. I ran to a lot of people, a deer, and people who hunted it. I ran to people from the US army, because they have base camps in the mountains, in San Diego. I ran to them, and they let me go. They gave me granola bars, because I did have no food. I lost my bag on the first day. I lost my bag in the river. So, I had no food. I was just drinking water. I was weak. Like on my fifth day, I had no food, nothing. I could see people. I started seeing people like they were following me. It was a mess. I was starting to give up. Like every time, I fell asleep, I would dream about my kids, then I would get up, and keep on walking for another 2-3 hours, and the same thing happens. I would get tired, and I would go to sleep again. It was hard.

Yeah, it was tough. I never done any… like I said, I’ve lived my whole life here. I didn’t normally in Mexico. When I got sent back on Christmas, it was 2011, December 3rd. I got sent back the first time after 18 years. It was tough because my kids, you know. I was just working. I was coming back from San Diego to Los Angeles. I went to the checkpoint at San Clemente, because I had no license or anything. The road patrol said, ‘OK, you have to go to Mexico.’

I kept on trying to cross, but I kept getting caught, and sent back to a place like a jail, but they keep you only for like three months, then six months, whenever time they want. I went a lot. I ran to some people in the middle of mountains. They were bringing drugs across. They stopped me, and asked if I was following them. I said, ‘I didn’t know that I was running to a trail that was used by the cartel where they bring drug across.’ And they thought I was spying on them. I said, ‘No, I was just trying to go to the US.’ They got their gun pointed at me, and I said, ‘I swear to God I was just trying to cross.’ So, they said, ‘OK, stay here for five hours, don’t follow us.’ It was… I never experienced that way. I only see it on TV.

When I went to Mexico, I saw everything. What you see on TV is nothing. If you go to Mexico, it’s like ten times more. It’s no game. They just harassing people who is going across. Somehow they got the number from you, your information, and start calling your family here, ‘We have this macho, we’re gonna kill him.’ My wife, she got really stressed those years. She was getting called every month. They said, they have me captured. They did it twice. They captured me twice for two weeks, no food, nothing. They just wanted money, $5000 once, and another time $5000 more. Right now, I am surviving. I came back, and I, you know the bills and everything, and now I spend more time with my kids.

I learned a lot, but I think the biggest lesson in my life is; before, I didn’t realize how important a family is. Now, I am a father, and my kids are really important, to spend more time with, and to show them that life is beautiful. It’s not just to be born and to live, but you also have to appreciate. I realize that, because I was four years without them.”

We’re part of this slum, our life too

Gustavo, Ana’s brother: “About me and my sister? We had a bad childhood. We did not know what a good childhood is, or even what was a toy. We didn’t...

I “wasted” enough time. So I started to change my life

“Hi, my name is Kevin Piechatzek, and this is my story: I was born and raised in Germany, but my family, my blood, is Polish. As a young boy, I...

We’re not slum people, we are human being

About being ‘villero’ “Being poor doesn’t mean being ‘villero’. In Fuerte Apache, in the Villa 21, there are many working people that get up at 4 a.m., and they are...

“I was an eight-year-old boy in 1940. My father, a former participant of the Civil War, understanding the actual unpromising tendencies, including repressions, and other negative developments, following his intuition...