Turkey has a huge problem with free-roaming dogs and cats, and the country is struggling with ways to manage the problem.  No one knows how many street cats and dogs are there in Turkey. One estimate is that in Istambul, a city of 11.3 million people, there are at least 150,000 free-roaming dogs. Rabies is endemic in Turkish dogs, and every year there are a small number of people who die from the bites of rabid dogs. The Turkish federal government passed a law a few years ago requiring cities to control the roaming dogs. But as in America, few cities have all the resources they need to effectively control the loose animals.

Cultural issues further complicate things.  Many Turks are quite comfortable with, and even enjoy, having the free-roaming dogs around. Free-roaming dogs have been documented in Istambul for at least several hundred years, perhaps longer. Today, dogs are found almost anywhere – even in this patio area of a Starbucks in Istambul.

The strategy being tried in Turkey is trap-spay/neuter-vaccinate/treat and release.  Free-roaming dogs are picked up off the streets, and taken to local shelters where they are spayed or neutered, vaccinated for rabies and other diseases, treated for minor illnesses, ear-tagged for identification, and then released back to the neighborhood where they were trapped. 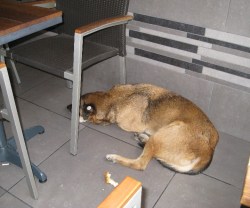 “Everyday I take people around the area. I drive this boat for them, and they travel with me. I hope one day, I will be a passenger and travel across...

“I feed cats every day twice a day. I don't know why, I think it's in my nature. I was born this way. My friends and my cats inspire me...

“A few years ago, when I was younger, I often thought about travelling. Today I have children, responsibilities, and I cannot always do what I want. If you want something...

I want to remember how I was

“I'm not sure I can allow you to take a picture of me. Because when I look at pictures, I feel very bad. I'm an old fat woman! Beauty is...